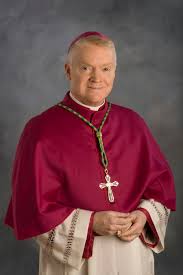 Bishop Stephen Jensen was born May 30, 1954 in North Vancouver, BC. He attended St. Peter’s Seminary in London, Ontario where he received his BA in Philosophy in 1976 and a Master of Divinity in 1979.

He was ordained a priest of the Archdiocese of Vancouver on May 24, 1980. From 1984 to 1998 he was a pastor in three parishes: Immaculate Conception and Corpus Christi in Vancouver and St. Ann’s in Abbotsford.

In 2001 he earned a doctorate in Education, specializing in educational leadership, at the Jesuit University of San Francisco. In 2009, the Most Rev. J. Michael Miller, CSB, Archbishop of Vancouver, named him Vicar General of the Archdiocese.

On January 3, 2013 Pope Benedict XVI appointed him Bishop of the Diocese of Prince George. His episcopal ordination and installation was conferred by the Most Reverend J. Michael Miller, Archbishop of Vancouver – assisted by Bishops David Monroe of Kamloops and Brian Dunn of Antigonish – at Sacred Heart Cathedral in Prince George on April 2, 2013.

Bishop Jensen has chosen the motto, Parare Vias Eius, which means “To prepare his ways”. It is from the song of Zechariah in Luke 1:76, a reference to the mission of St. John the Baptist as prophesied by Isaiah.